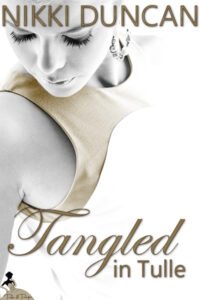 The elevator chimed with the announcement of Lori’s arrival. Her heart slowed to a crawl. I should have found another backer.

The doors opened. In slate-gray suit pants, a crisply pressed, pale blue shirt which matched his eyes perfectly and a tie a shade darker stood the man she’d longed to see. Dreaded to see.

She took a step. Stopped.

Her heart trembled within its shrinking cage. Hopes, doubts, fears coalesced and lodged into a word barricade in her throat.

His long, narrow face, frozen in an I’m-on-a-mission-and-won’t-be-swayed stare, captivated her as quickly as it had the first time. Like the first time, she knew the secret to his success had to lie in part in his skill at hiding his thoughts, because knowing he was on a mission didn’t help without knowing what mission.

Not knowing made erecting defenses impossible and she needed every defense she could muster.

“Lori.” Her name, soft and even, with no inflection or hint of emotion, served as a backhand to the cheekbone. Sharp. Blinding. She shouldn’t have come to him. She should have listened to the fifteen banks unwilling to take a chance on her in the current economic climate.

“Trevor.” The elevator doors began closing. Moving quickly, she exited with as much grace as possible, determined to be equally unreadable.

He didn’t move. As the doors closed behind her, she was again cut off from escape with maybe a foot between them if she measured generously. Her belly tightened.

“I almost didn’t believe it was you when I saw your name.”

Had he wanted her to be someone else, or had he been happy to see her name? Angry? Resentful? Had he agreed to meet with her just to get a bit of revenge? She wished she could read him, but as skilled as she was at reading people he’d always been the exception. “I won’t take much of your time.”

“So your visit isn’t personal?”

“Business.” Did he want it to be? Could he really want anything personal with her again? Not that it mattered. She wouldn’t travel any road with a personal relationship until her life was on a path less littered with sinkhole memories.

“Right. Well…” He stepped back and gestured toward his office. “Come in and tell me what this is about.”

She followed him across the plush waiting area which was decorated with subtle touches of fall and past his watchful admin. Watchful like maybe Trevor was acting out of character.

Each step closer to Trevor’s office and the connected apartment where they’d spent chunks of their alone time—paid and non-paid—contracted Lori’s muscles.

She shoved the thoughts back and without waiting for him to close the door, headed to his desk to claim one of the guest chairs. Rather than sitting in his chair, he took the second guest chair.

She’d been certain he’d showcase his power on his turf, but sitting at her side equalized them. Or he was calculating ways to keep her on edge.

“I have a proposition.” She plunged into the purpose of her visit to keep her thoughts from straying to personal topics.

Business needed to be the theme. Only business. No innuendo. She’d have to choose her words with more caution.

Ignoring the distraction of his nearness, or trying to because completely tuning out his magnetism wasn’t happening, she reached into her bag for the bound portfolio she’d put together and passed it to him. “As you may know, I’m looking to start a new venture.”

He said nothing. He didn’t glance at the proposal.

“I’ve always loved design and weddings, so I’ve decided to put the two together.” She paused, but again he said nothing. He only regarded her with the same unwavering gaze.

“Specifically, I am looking to start a full service wedding planning business. I have experts in every area of weddings lined up to come work with me. Clients can hire us for individual aspects or for the entire event. If they cannot find what they want, we’ll design it. To ensure their day is everything they want we’ll work within the client’s budget on each aspect.”

Again she paused. Again he didn’t speak. His silence and lack of questions unnerved her, put her on the defensive when she played better offense.

“A woman shouldn’t have to run all over town or second guess herself when she’s taking such a monumental step in her life. She should be able to focus on her happiness.”

His mouth curved in a small, victorious smile that shifted his face into warmth. The first time she’d seen that smile they’d been dining on veal and wine with classical music in the background. Whatever she’d just said pleased him. Why? How?

She squished the insecurity and defenses springing to her tongue. Arguments that working as an operative for the government, always having a different assignment, had prepared her for anything and everything loitered, but she suppressed them. He’d met her as an escort and didn’t know, he couldn’t know, the rest of her story. Maybe his question was valid. No. It wasn’t.

“Planning the perfect wedding takes organization and the ability to recognize the importance of a lifelong commitment.”

He nodded and receded into silence. After studying her for several moments, staring until her skin itched with the need to squirm, he lifted the proposal and skimmed the pages. He gave equal attention to the pages with sample designs, her ideal building layout complete with square footage requirements, the projected budget outlays, her available cash flow and how much she would need. Occasionally he made a noise low in his throat, but she couldn’t tell if he was impressed or shocked or thought her projections to be somehow out of line.

The need to squirm grew.

She’d done this dance with every banker she’d met. Each time they’d kept a copy of the proposal, taking weeks to study, analyze and consider before handing back her application stamped with a large REJECTED.

The second hand of her watch ticked in the silence.

When Trevor closed the proposal and sat it on his lap, finally, a glance at the clock showed Lori thirty minutes had passed in silence. His eyes sought hers and held her arrested.

On autopilot, having heard what would come next and aware it would hurt more coming from Trevor, she stood with a quick nod. “Thank you for your time.”

He grabbed her hand when she’d have moved past him. His thumb brushed over her pulse. The grip was gentle and full of earnest command. “Sit down, Lori.”

She looked down, a little over her shoulder, and met his gaze. “I don’t need explanations, Trevor. The no is enough.”

He regarded her, unblinking, until she felt certain her deepest secrets were exposed.

“Sit down.” His command was unavoidable. He would not be ignored. When he released her hand she fought back her ingrained urge to argue and instead obeyed.

“I will not give you a loan, but will offer an alternative proposition.”