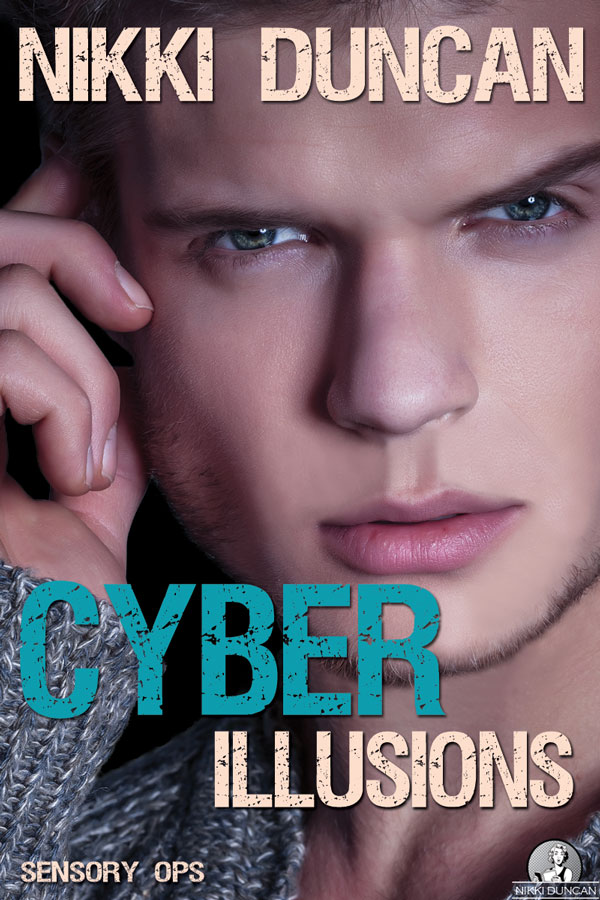 Torn between promises and passion, duty and desire…

Taryn Bellamy has shamelessly used the art of illusion to build a name for herself in the entertainment industry. But it hasn’t magically made it easier to raise the twins left in her care by her past best friend.

After one of the twins runs away, Taryn chases the girl all the way to Miami, where she comes to face to face with the kids’ father. He’s an FBI agent—and he sparks a dangerous heat in her veins. Heat that could send the heart and soul of her closely guarded life up in a puff of magical smoke.

When tech genius Tyler Greer traces a hacker’s cyber trail to a private runway at a Miami airport, he’s surprised to find Taryn, whom he suspects was involved in a series of high-profile art thefts years ago. A crime he could never quite make stick to the slippery, sensual illusionist.

Then he discovers the kids in her care are his. The truth rocks Tyler’s world…and leaves Taryn fearing the greatest crime will be against her heart.

Warning: A father’s chance to know his children tangles into a web of doubt and passion that threatens a few hearts.

Illusions were Taryn Bellamy’s business and her success stemmed from her ability to project an expected image. When the applause died and the spotlights went out she became the woman her audience would never know. A woman with a need for family and relaxation rather than excitement and intrigue.

While her eyes adjusted to the dimmer light of backstage and her skin still buzzed with the excitement of having given people a magical night, she pulled her hair into a ponytail, using the hairband Davio, her stage and prop manager, handed her as she stepped off stage.

“Thanks, Davio.” She smiled into the darkness of his Greek-god looks, a couple years past their prime but still handsome. “Excellent choices for the volunteers, as usual.”

Davio had joined her crew two years ago, using his charisma to charm his way into the job, and he’d delivered on every promise he’d ever made. For a man, he wasn’t large, not much bigger than her, but women seemed to like the ropey guy with exotic coloring and a slight paunch. His appearance combined with his European accent made him nonthreatening and captivating.

“Thank you.” He passed her a bottle of water and followed her toward the dressing rooms. “Your mom has texted you several times since you went on. Says she needs to talk to you.”

“I’ll call her,” Taryn said as she opened her door. “If you don’t need anything from me.”

“I got it.” Like he did after every show, with the audience gone, Davio went to oversee the packing up of the props. For him, that meant doing the job himself. He didn’t know every detail of every illusion, but instead of asking he simply accepted that some secrets didn’t get discussed.

In her dressing room, with the phone on speaker, she began changing from her stage costume and waited for her mom to answer.

The hairs on the back of Taryn’s neck tingled the way they did when something bad happened to one of the kids. It was a sensation she didn’t experience often, but she hated it equally every time. “Mom? Is everything okay? Is Ryder feeling better?”

She froze, and intensely afraid of what her mother would say next she asked. “What do you mean gone?”

“I can’t find her anywhere.”

She shook. Every cell inside and every skin covered inch outside, shook. “I thought she was going to Addy’s house tonight after Tae Kwon Do.”

“Yeah, me too. When I called to see if she’d remembered to get Ryder’s homework from school, Addy’s mom said she wasn’t there and that she knew nothing about a sleepover.”

“Have you asked Ryder?” If Sidney was up to mischief, which wouldn’t be a real surprise, her twin brother would know. The challenge rested in getting him to rat her out. The boy was loyal to his core.

“He only shakes his head while keeping his eyes locked on his screen.” Mom’s jagged sigh shook the phone lines, portraying her level of stress and raising Taryn’s. “I looked through her room and found a map of Miami with a few spots marked with a highlighter.”

“Miami?” Taryn couldn’t think of a school project that would involve researching Miami, so what could Sidney be up to? With her stage costume now on a hanger, Taryn slipped on her jeans and reached for the blouse she’d changed out of earlier. “Let me make a few calls, do some checking, and I’ll call you back.”

Trying not to jump to conclusions of the scary variety, though they were swarming, Taryn slipped on her shoes, skipped the habit of removing her makeup, grabbed her purse and headed toward Davio. While she walked, she dialed Sidney’s Tae Kwon Do coach Jack.

“Davio, something’s come up with Sidney. Can you handle things here?”

“You bet.” Concern deepened his eyes. “Everything okay?”

“I’ll let you know when I know.” She wasn’t sure where she was going, or what she was going to do, but she needed to be moving. With a parting, “Thanks,” just as Jack answered, she took the back exit.

“Jack, it’s Taryn.” She turned toward the hotel, thinking that walking the three blocks might help her settle herself so she could think. “My mom called. Sidney isn’t where she said she’d be. Did she say anything in class about what she was doing tonight?”

“She wasn’t in class. I assumed she’d gone out of town with you.”

Taryn’s heart plummeted. Her stomach dropped. She stumbled on the concrete and fought to keep calm in her voice. Fear made it the toughest challenge of her life. “Thanks. I’ll keep looking.” It was all she could do, because giving in to the panic settling in the back of her brain would solve nothing. “She’ll turn up.” I hope.

Dialing Sidney’s teacher’s cell, Taryn thought of all the places Sidney might have gone, who with and why.

Sidney was the outgoing one of the twins and she had a talent for concocting scenarios—schemes—from start to finish, complete with an accurate prediction of how much trouble she would get in. And then she’d do it anyway. She lost track of time easily when something captured her attention, but she never skipped Tae Kwon Do and she wouldn’t miss an opportunity to sleep over at Addy’s.

“Mrs. Haliwell. This is Taryn Bellamy. I’m calling about Sidney.”

“Colorful. Listen, did Sidney say anything in class today about her weekend plans?”

“She wasn’t in class today, but yesterday I overheard her talking to Addy about going to see her father while you were out of town. I assumed she was with you and that you would send a note next week. Is she not with you?”

“No. But I’ll find her.” Taryn’s mind whirled, unable to quiet. She hung up and instead of calling anyone else she flagged down a cab. Headed toward the airport and her plane, she texted her pilot and then Davio. She would go to Miami and send the plane back for the crew. Davio and her crew would handle all the details for their equipment and rooms.

Logic said the girl couldn’t be in Miami. She had no money, no credit card and no way to get to the airport alone, but an irrational hope to find her quickly angled Taryn toward the illogical. Ten years old or not, if anyone could pull it off Sidney could.

Fearful with helplessness, Taryn called her mom again as she boarded the plane.

“Did you find her?” her mom asked.

A moment later, Ryder was on the phone. “Yeah?”

“Ryder, Mrs. Haliwell said something about Sidney finding her dad in Miami. Mom found a map of Miami in her room. Is she there?” Before he could respond she went on. “You’ve never been able to lie to me, Ryder, so don’t even try.”

He was quiet for a minute. She could picture him staring at his computer screen while he thought something out. He rarely made eye contact when a screen was around. She didn’t have to wait long for a reply.

Anger erupted in her brain, forcing her to take a calming breath to hold back her chastisements. “Tell me the rest.”

“Our dad’s name is Tyler Greer. He’s in Miami, but he’s not in prison. He works for the FBI, and Sidney skipped school today to go find him.”

“What?” Taryn grabbed the tablet she kept on the plane. “You are so grounded, and later you’re going to tell me how you found him. Right now, send me what you have on him.” For the first time ever she wished she’d broken down and given the kids cell phones. “How did she plan on getting to Miami? Where is she staying?”

“A plane. We had it all planned out.”

“And neither of you thought to say anything?” Taryn fastened her seat belt as Richard, her pilot, prepared for takeoff. He’d moved quickly to file a flight plan and get ready to go. She would keep it in mind when she wrote his next check. “I would have taken you.”

Taryn hated how easily the twins’ mother had signed over custody, kissed her kids on their foreheads and walked away. If she’d known who or where their father was, she’d have called him immediately and given him the chance to step up. All she’d known was his first name and that he’d been taken to prison by the FBI sometime before the kids were born, so reaching out hadn’t been an option.

“We didn’t want to upset you. She was planning on being home before anyone noticed.”

“Well, her plan didn’t work, did it? How are you communicating with her?”

“She wouldn’t have left home without a plan to talk. Spill.”

Ryder sighed, obviously upset that they’d been found out and he was having to sell out his sister. “There’s an app on her tablet. It’ll only work when she’s connected. I’ll send it to you.”

“When we’re done, you can consider yourself grounded from technology until I tell you differently.”

“Ryder. Don’t push me. This is a big deal.” Her heart rate eased marginally with the knowledge of where Sidney was, ballpark anyway, and what she was doing. But the thought of a ten-year-old girl being alone in Miami and all the dangers that came from that birthed new terrors.

During the flight time, Taryn read up on Tyler Greer, tech specialist for the FBI Specialized Crimes Unit, and studied the maps of the area Sidney was supposed to be in. She booked a hotel room and then a car to meet her at the plane. She called the FBI, unsure how to explain herself in a voice mail. It hadn’t mattered. Tyler wasn’t in the office and she’d hung up before his voicemail greeting finished.

By the time the wheels touched down her nerves were frayed and as tired as she was, having been up for eighteen hours, she was ready to hit the streets.

As she moved to the exit, a black SUV pulled up. The two front doors opened and the man exiting the driver side called out in a commanding voice, “Taryn Bellamy. FBI.”

Taryn looked between the sweet-faced brunette a little shorter than herself and the man. Taller, blond, with a light tan and caramel-colored eyes, he looked more like he belonged on a beach with a surfboard than on a tarmac in jeans, a button-down and tie.

She didn’t have to hear his name to know…

He looked like an older version of his children.